Regulations for the Election of Burgesses, 1769

During the eighteenth century, voting was considered a privilege, not a right. Although governmental bodies, such as the House of Burgesses, were meant to be representative, a majority of people could not actually vote. A voter in early Virginia had to be free, white, male, over twenty-one, and have either a life-lease or outright ownership of property.

Although groups such as women were not allowed to vote, they were still required to pay taxes and meet other civic obligations. Many of these voting requirements would not change until the nineteenth and twentieth centuries.

Analyze: Under this act, who is excluded from voting?

Analyze: Why do you think these groups were excluded from voting?

In Their Shoes: If you were a disenfranchised person during this time, what would you include in a petition to argue for the ability to vote? 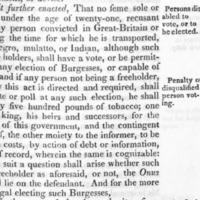 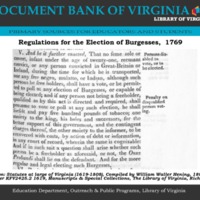 “Regulations for the Election of Burgesses, 1769,” Document Bank of Virginia, accessed July 5, 2020, https://edu.lva.virginia.gov/dbva/items/show/139.