In 1850, the United States was embroiled in the slave vs. free state debate as more territories were being added to the Union. Recently elected President Zachary Taylor opposed any legislation that would address the problem, and felt that the issue should be left to the courts. This was a barrier to Sen. Henry Clay of Kentucky as he pushed for the Compromise of 1850, but when Taylor died, his successor, Millard Fillmore, was more open to such legislation.

The Compromise of 1850 was a plan that consisted of several important parts:

This map by Phelps, in addition to showing the territories of the U.S. in 1850, is also surrounded by a collection of portraits of American presidents, leading figures, and state seals.

Up for Debate: How would you use this visual to either defend or repudiate the Compromise of 1850? Which sections or images support your argument?

Analyze: Find the figures who are NOT American presidents on the map border. Why do you think they were included? 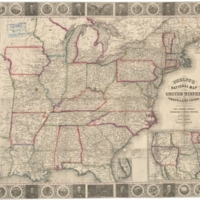 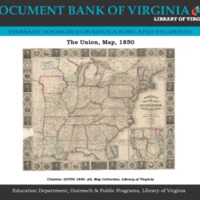