James Buchanan  served as America’s 15th president from 1857 to 1861. While he was in office, seven Southern states seceded from the Union. Originally from Pennsylvania, the only president with that claim, Buchanan began his political career in his home state’s legislature and went on to serve in the U.S. House of Representatives and Senate. He was morally opposed to slavery but believed it was protected by the U.S. Constitution. As he came into office, the Supreme Court was considering the legality of restricting slavery in the territories. In his Inaugural speech, Buchanan referred to the territorial question as "happily, a matter of but little practical importance" since the Supreme Court was about to settle it "speedily and finally."

As president, Buchanan tried to maintain peace between pro-slavery and anti-slavery groups within the government, but tensions only escalated. In 1860, after Abraham Lincoln was elected to succeed Buchanan, South Carolina seceded, and the Confederate States of America was soon established. In April 1861, a month after Buchanan left office, the Civil War began.

Learn more about Buchanan from WhiteHouse.gov

Analyze: Consider the principles listed on the ticket:
- The Constitution
- The Sovereignty and equality of the States
- The repeal of the Missouri Restriction
- The people of the Territories in forming State Governments to adopt their own institutions.
If you were a voter in 1856, how would you interpret each of these?

In His Shoes: Write a journal entry as if you were James Buchanan and dealing with the first round of seceding states.  Based on your political views, would you take responsibility? If so, how would that responsibility conflict with your personal beliefs about slavery? 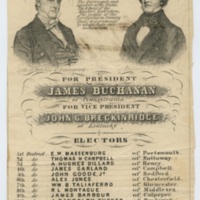 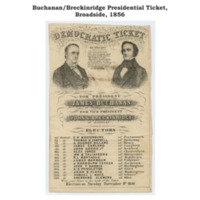