The Democratic Party split in two in 1860. John C. Breckinridge, vice president of the United States, became the presidential nominee of the faction sometimes referred to as the Southern Democrats. The party advocated the expansion of slavery into the territories and strong enforcement of the Fugitive Slave Law of 1850. The party's platform further affirmed the right of the federal government to protect the rights of slaveholders in the states and territories.  The platform also called for the annexation of Cuba and the construction of a transcontinental railroad.

A Kentucky native, Breckinridge believed that slavery should be constitutionally protected and that Southern states had the right to secede. His running mate, Joseph Lane, represented the Oregon Territory in the United States House of Representatives and also approved of the expansion of slavery into the territories. Breckinridge and Lane won most of the slave states, but finished a close second in Virginia, where the presidential election was the closest in its history. The vote totals published in the Daily Richmond Enquirer on December 24, 1860, show that John C. Breckinridge received 74,379 votes (44.46 percent) in Virginia.

Artistic Exploration: Learn more about John Breckinridge from Senate.gov, and design a campaign poster either for or against his run for President, focusing on his track record and political stances.

Anaylze: Find the top most closely contested presidential elections in Virginia. What, if any, were the similarities in issues facing the country at the time? 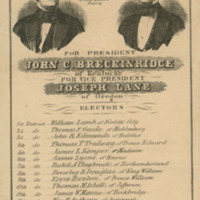 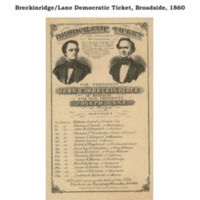