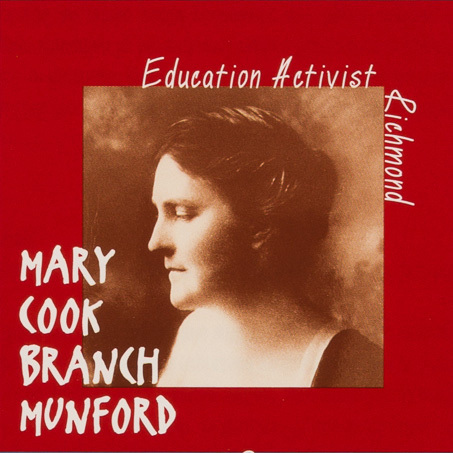 Richmond native Mary-Cooke Branch Munford (September 16, 1866–July 3, 1938) was not allowed to attend college and sought other ways to develop her keen intellect and her desire for social usefulness. In 1894 she helped establish a citywide Woman's Club, which quickly became one of the premier women's organizations in Virginia. She later joined the board of the Richmond Consumers' League, and in 1900 cofounded the Richmond Education Association to improve the city's struggling public school system. From 1904 through 1911, Munford served as its president, and in 1920 she was the first woman appointed to serve on Richmond's school board. Her interest in education extended statewide, and during her tenure as president of the Co-Operative Education Association of Virginia she championed major educational reforms. In 1910 she launched an unsuccessful crusade to establish a Co-Ordinate College for Women at the University of Virginia, but her efforts convinced the College of William and Mary to admit women in 1918.

Joining other southern progressives to improve race relations and promote interracial cooperation, Munford helped found the Virginia Industrial School for Colored Girls in the 1910s and served on its board of trustees. She was also a trustee of Fisk University and the National Urban League and a founding member of the Virginia Inter-Racial Committee. Her reputation extended beyond Virginia, and she sat on the boards of the National Consumers' League and the National Child Labor Committee. In 1920 she was appointed a member of the Democratic National Committee.

In recognition of her profound impact on education in Virginia, a dormitory at the University of Virginia and an elementary school in Richmond bear Munford's name.