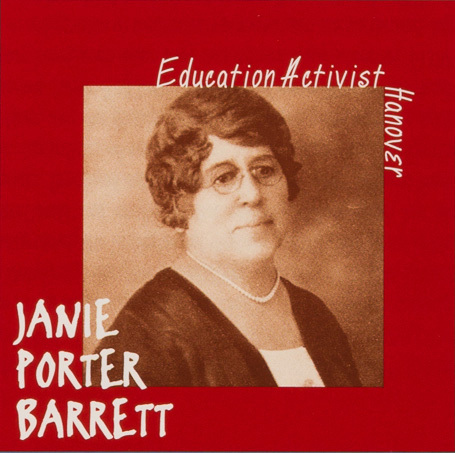 Born in Athens, Georgia, Janie Porter Barrett (August 9, 1865–August 27, 1948), the daughter of a former slave, completed her formal education in 1884 at Hampton Normal and Agricultural Institute (now Hampton University). After teaching in Georgia schools and in the night school at Hampton, she married Harris Barrett, another Hampton graduate. Rather than settle for a comfortable life as a middle-class wife, Janie Porter Barrett devoted herself to social service work. Her Locust Street Social Settlement, established in 1890 and modeled on Jane Addams's Hull House in Chicago, gave help to poor women, taught job skills, and educated their children.

In 1908 Barrett became a founder of the Virginia State Federation of Colored Women's Clubs, an affiliate of the influential National Association of Colored Women. During the 1910s she forged important creative alliances with members of the parallel white women's organizations in Virginia, particularly with Mary-Cooke Branch Munford, a Richmond social leader who worked for improvements in public education for children of both races. Their cooperation and the assistance of such business leaders as Richmond banker Maggie Lena Walker led to the Virginia Federation's 1914 purchase of a farm in Hanover County to provide safe housing, medical care, and job training for unmarried young black women and their children.

Barrett managed the innovative and successful Virginia Industrial School for Colored Girls from 1915 until her retirement in 1940, by which time it had become part of the state system of schools for poor and needy girls. She boldly used her influential position to advocate black voting and participation in government years before the civil rights movement. Two years after her death on 27 August 1948, the General Assembly named the Hanover County school after her.