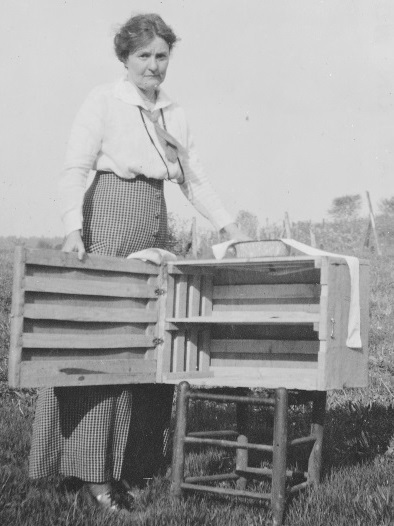 Ella Graham Agnew (March 18, 1871–February 5, 1958) grew up in Nottoway County and attended business school in Richmond. While working as a secretary at a Long Island publishing firm, she was recruited in 1895 to teach stenography at the Huguenot Seminary in South Africa. She became the principal of a girls' boarding school and later worked for the Boers and the American consulate during the Boer War.

After returning to the United States, she began a long association with the Young Women's Christian Association and became interested in practical education for rural girls. She created a vocational education program in Virginia, and in 1910 became the first female field-service home-demonstration agent of the United States Department of Agriculture. The Virginia Agricultural and Mechanical College and Polytechnic Institute later administered her program, which included sewing, poultry husbandry, and other aspects of home economics.

Agnew was founding president of the Virginia Federation of Business and Professional Women's Clubs in 1919. Early in the 1920s she traveled to rural YWCAs around the country and developed instructions to finance local chapters. She also served as the first female editor of the Southern Planter's section for women. In 1933 Agnew became the Virginia director of work relief activities for women with the New Deal organization later known as the Work Projects Administration. She was an able administrator and her programs became models for other states.

Agnew retired in Richmond after the WPA closed in 1943. She received awards for improving opportunities for women and she was the first woman to have a building named for her on the Virginia Tech campus.

Image Courtesy of the National Archives and Records Administration.