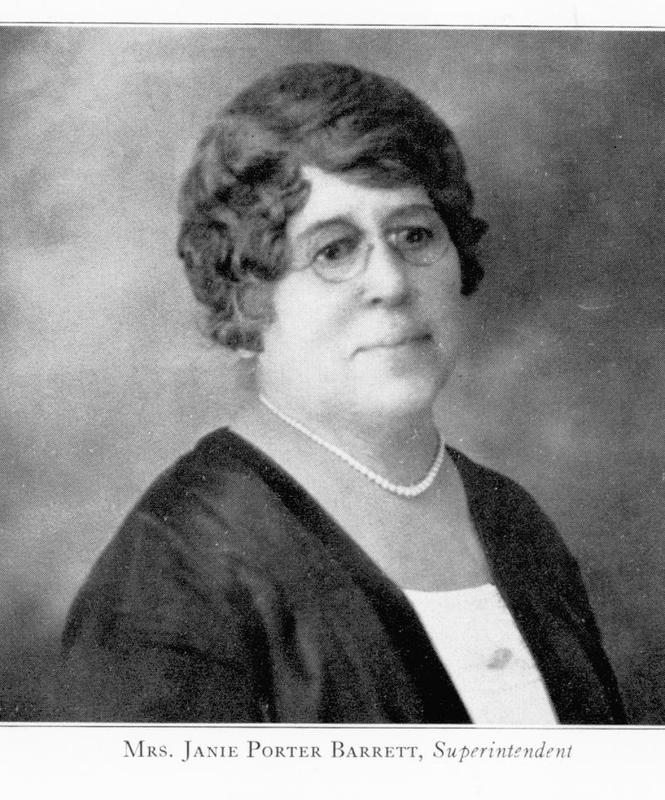 Born and raised in Georgia, Janie Porter Barrett (August 9, 1865–August 27, 1948) was the daughter of an African American domestic servant and seamstress. Educated at Hampton Normal and Agricultural Institute (later Hampton University), the first of the self-help training schools for freedpeople, Porter taught both in Georgia and at Hampton before marrying Harris Barrett, a fellow Hampton graduate, in 1889. They had four children.

After settling in Hampton, Janie Porter Barrett was the impetus behind the Locust Street Social Settlement. Clubs and classes devoted to domestic and agricultural vocations met daily. Barrett encouraged children to play athletic games and worked to improve the community. When the settlement outgrew their own house, the Barretts built a clubhouse.

In 1908 Barrett helped found the Virginia State Federation of Colored Women’s Clubs, and she served as its president until 1932. Convinced of the need for a home for what were then called wayward girls, Barrett challenged the federation to take up the cause. Gaining support from the National Association of Colored Women (NACW), Barrett had enlisted also the aid of some white Virginia women by 1913.

The Virginia State Federation of Colored Women’s Clubs bought a farm in Hanover County north of Richmond. With the help of the General Assembly, the Industrial Home School for Colored Girls (later the Virginia Industrial School for Colored Girls) opened in January 1915. Barrett emphasized that it was a home rather than a prison and instituted a system of rewards instead of punishment. She taught the girls vocational skills to work as domestic servants or farm workers and strove to prevent the exploitation of former students by employers.

In the 1920s Barrett took an active part in the Virginia Commission on Interracial Cooperation, the Richmond Urban League, and the NACW. She died in Hampton in 1948 and was buried there in Elmerton Cemetery. Two years after her death the General Assembly renamed the school she had founded the Janie Porter Barrett School for Girls. In 1977 the school became the Barrett Learning Center, for boys.