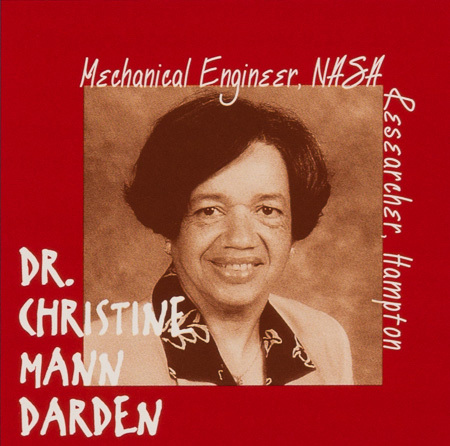 Growing up in North Carolina, Christine Mann Darden (b. 1942) was inspired by a high school geometry teacher to study mathematics. She graduated with a BS from Hampton Institute (later Hampton University) in 1962, and taught math at high schools in Lawrenceville and Portsmouth while also earning an MS in applied mathematics at Virginia State College (later Virginia State University). After graduating in 1967, Darden joined the "computer pool" at the National Aeronautics and Space Administration (NASA) facility at Langley Research Center, in Hampton.

Darden spent six years as a data analyst before she successfully argued for a promotion to aerospace engineer in 1973. Assigned to a sonic boom research working group, she developed an innovative computer code to produce low-boom sonic effects during supersonic flight. Darden studied mechanical engineering at George Washington University while working and raising three daughters, and earned her DSc in 1983. Six years later she was named technical leader of the group responsible for developing NASA's sonic boom research program. Appointed director of the Aerospace Performing Center at Langley in 1999, Darden oversaw research programs in air traffic management and other aeronautics programs. She served as a consultant for government and private projects and wrote numerous publications related to her research. Darden retired from NASA in 2007, having spent her final years as director of Langley's Office of Strategic Communications and Education.

Darden's achievements have been recognized with awards from NASA, and in 1988 U.S. Black Engineer and Technology magazine honored her as one of its Black Engineers of the Year. She was also featured in Margot Lee Shetterly's bestselling book, Hidden Figures: The American Dream and the Untold Story of the Black Women Mathematicians Who Helped Win the Space Race (2016).