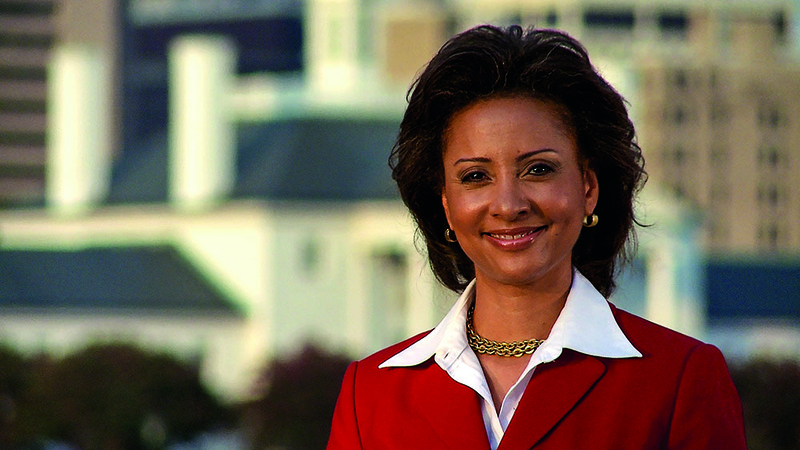 Born in Tacoma, Washington, and a graduate of Louisiana State University, Stephanie Rochon (May 3, 1965–June 3, 2015) began her career in radio in Baton Rouge before ultimately becoming a news anchor in Austin, Texas. In 1999, she relocated to Richmond to serve as an evening news co-anchor at WTVR Channel 6. Asked by her news director to produce monthly reports on breast cancer awareness, Rochon drew on her mother’s experience as a breast cancer survivor for her “Buddy Check 6” segments. She related stories of survivors and important health information and in particular encouraged women to do self-exams and have a buddy remind them to get yearly mammograms. She focused especially on reaching low-income women and African Americans, who are disproportionally affected by the disease. The American Cancer Society honored her work with its Regional Media Award. In 2015, Rochon was nominated for an Emmy Award for “Buddy Check 6.”

In addition to her work in the newsroom, Rochon served on the board of the Ellen Shaw de Paredes Breast Cancer Foundation, which helps provide access to mammograms for uninsured and underinsured women. Rochon also participated in the annual Gift of Life Block Walk, in which cancer survivors and volunteers visit underserved African-American communities to share information and raise awareness of breast health. After her death from bile duct cancer in 2015, the Virginia General Assembly recognized Rochon’s work on behalf of women’s health and the “Buddy Check 6” reports, which continue to air on Channel 6.

Watch Stephanie Rochon-Moten's family accept the award on her behalf at the 2017 Strong Men and Women in Virginia History awards ceremony on February 3, 2017.