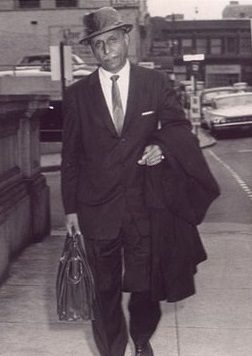 Oliver White Hill (1907-2007) was born in Richmond and began school in Roanoke but moved to Washington, D.C., to complete his education because there was no high school for African Americans in Roanoke. He graduated from the Howard University School of Law and became one of the most active and successful of Virginia's civil rights attorneys, filing and winning law suits against segregation and discrimination from before World War II until the end of the twentieth century. In 1951, students in Prince Edward County persuaded him to challenge mandatory racial segregation in the state's public schools. Hill served as counsel in the United States Supreme Court in the Virginia suit that was combined with others in the 1954 Brown v. Board of Education decision declaring mandatory racial segregation unconstitutional, even under the guise of separate-but-equal.

Hill was the most distinguished and successful of the many African American attorneys who achieved major breakthroughs in the civil rights movement in Virginia. In large part because of attorneys like Hill, the civil rights movement in Virginia was known for its many important legal victories rather than for violence and recrimination. In recognition of his contributions to the legal profession and the nation, President Bill Clinton awarded Hill the Presidential Medal of Freedom in 1999. By the time that he died at age 100, Hill had become one of the most respected and revered Virginians of the twentieth century.