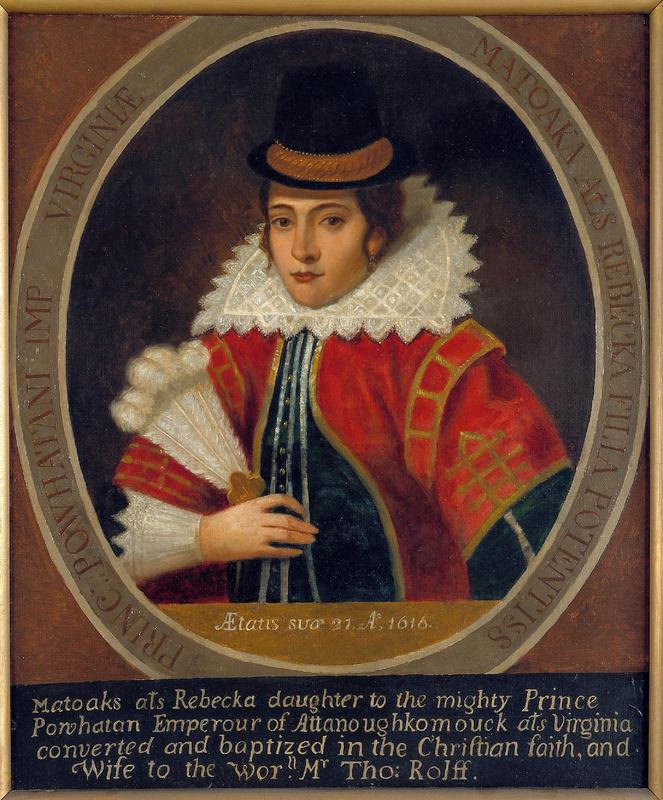 The daughter of Powhatan, the powerful paramount chief of the Algonquin Indians in eastern Virginia, Pocahontas (d. March 1617) was about eleven years old when the English colonists arrived at Jamestown in 1607. Although she had been named Matoaka and later adopted Rebecca as her name at the time of her marriage, she has been best known for four centuries by her nickname Pocahontas. John Smith later credited her as saving his life after he had been captured by Indians who took him to the town of Werowocomoco, Powhatan's home. She became a trusted visitor to the fort at Jamestown, delivering messages and food. She was known for her high spirits and was described as turning cartwheels around the fort with English boys.

During the first Anglo-Powhatan War, Pocahontas was kidnapped by the English in April 1613 and held in captivity for a year. She met John Rolfe, a planter, and agreed to marry him and convert to Christianity. Their wedding on April 5, 1614, resulted in an interim of general peace in the colony. When the deputy governor sailed for England in 1616 to raise the colony's profile and funds for the Virginia Company, Pocahontas went with him along with her husband and infant son and others. While in London she attended balls, plays, and other social events, had an audience with the bishop of London, and was presented to the king. Her family planned to return to Virginia in March 1617, but Pocahontas died before their ship left and was buried on March 21, 1617, in St. George's Church, Gravesend, England. During the 19th century, the story of Pocahontas and how she saved John Smith became legendary in the history of Virginia's founding, while obscuring the life of a courageous young woman who strove to help her people through her actions.