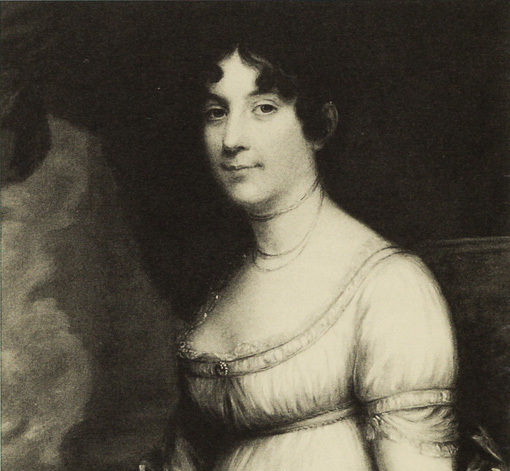 A member of a Quaker family, Dolley Payne Todd Madison (May 20, 1768–July 12, 1849) grew up in Hanover County before her father moved to Philadelphia about 1783. She married a Quaker lawyer, but he and one of their two sons died in the yellow fever epidemic of 1793. The following year she married James Madison, a member of the House of Representatives from Virginia, and they later settled at Montpelier, his plantation in Orange County.

They moved to the new capital city of Washington, D.C., where Dolley Madison became a well-known and popular hostess while her husband served as Secretary of State (1801–1809) and afterward as the fourth president of the United States (1809–1817). As First Lady, Madison established highly popular weekly receptions and served as a political partner to her husband, supporting his agenda and reaching out to his opponents when necessary. During the War of 1812, she delayed leaving the White House in order to secure papers and other valuables, including (by her account) the portrait of George Washington, from the British forces threatening the city.

After James Madison retired to Montpelier, she assisted him in organizing and preparing his papers for publication, including those of the Constitutional Convention of 1787. She was devoted to her husband and rarely left Montpelier until after his death, when she returned to Washington, D.C., in December 1843. Although an impoverished widow, Dolley Madison continued her active role in society and was mourned by congressmen, Supreme Court justices, and the president at her funeral in 1849.