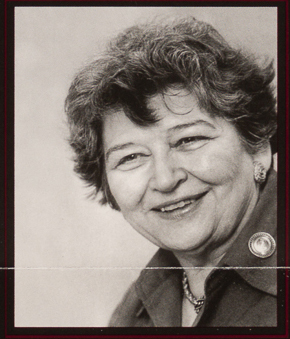 After graduating from the College of William and Mary in 1944, Anne Dobie Peebles (July 7, 1922–July 12, 2012) taught high school history in her native Sussex County for two years. She helped manage her parents' ancestral farm, Dunnlora, and with their encouragement soon began volunteering with a variety of civic organizations. She joined the local chapter of the Virginia Federation of Women's Clubs and held office at the district level before being elected president of the statewide organization in 1958. She spearheaded the federation's fund-raiser to purchase an x-ray machine for cancer research at the Medical College of Virginia.

Her civic work, coupled with an ability to work with others, gave her a base of recognition and she became an advisor and confidant of legislators and governors. Albertis S. Harrison Jr. tapped her to help him in his run for governor in 1961, and she chaired the women's division for the gubernatorial campaigns of Mills E. Godwin Jr. in 1965 and 1973 as well as for Harry F. Byrd's senatorial campaigns in 1966 and 1970. A vocal advocate for high-quality public education, Peebles received an appointment to the State Board of Education in 1962. She served on the board of visitors of the College of William and Mary from 1974 to 1987, and in 1984 became its first female rector.

Although Dobie described herself as "just a simple old country woman," she achieved success throughout her long career of public service, undertaking countless projects out of the limelight. In 1988 she was named a Virginia Cultural Laureate for outstanding service to the commonwealth.

Image Courtesy of the Peebles Family.