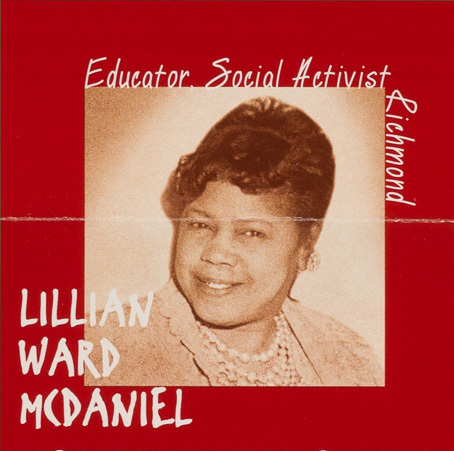 For Lillian Ward McDaniel (February 4, 1902–January 29, 1981) striving for more knowledge was a great drive throughout her life. A native of Richmond, she studied at Virginia Union University before going on to earn a master's degree in child development at Columbia University. She began teaching in 1923 at Dunbar Elementary School and stressed the importance of providing a high-quality education in the city's segregated public schools. Throughout a career of almost fifty years, McDaniel always told her students that "your mind is the greatest thing ever placed on earth."

A leader in civic, religious, and educational organizations, McDaniel strove to reach across racial barriers. For many years she presided over the citywide Women's Fellowship Bible Class and served as an officer for the Richmond chapter of the National Council of Negro Women. She was active in the Virginia Teachers Association, serving as a district president, as the elementary teachers section president, and as a member of its executive council. In 1960 she was a delegate to the White House Conference on Children and Youth. She helped organize chapters of the National Association of College Women (later the National Association of University Women), which encouraged young women to pursue higher education as well as providing a platform for professional women to advocate educational and social reforms. As president of the NACW from 1961 to 1965, McDaniel urged women to be a catalyst for change.