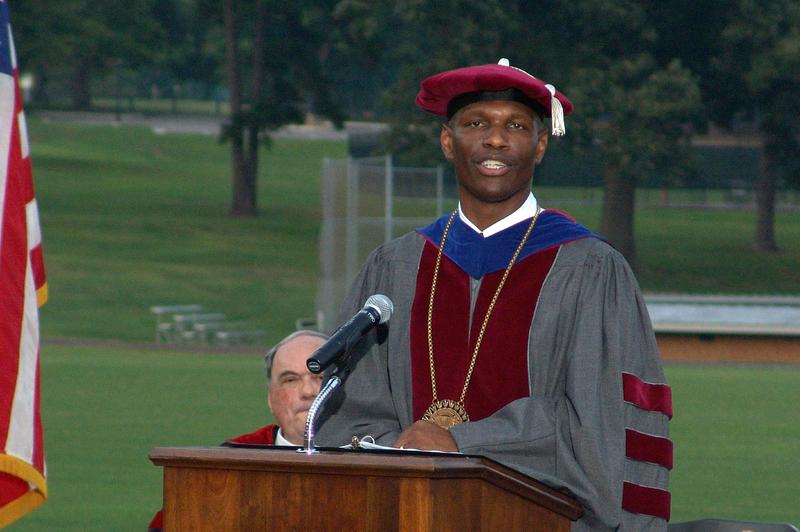 Born in Mount Pleasant, Texas, Christopher Bernard Howard (1969- ) was an active student at Plano Senior High School. At the United States Air Force Academy, Howard was a starting running back, received First Team Academic All-American Honors, and graduated with a bachelor's degree in political science in 1991. Named a Rhodes Scholar, he went on to complete his PhD in politics at Oxford University in England in 1994.

A lieutenant colonel in the United States Air Force Reserves, Howard serves as a part of a defense attachment to Monrovia, Liberia. He was named Company Grade "Intelligence Officer of the Year" in 2001. While on active duty in 2003, Howard received the Bronze Star for Distinguished Service in Combat in Afghanistan. In 1998 Secretary of Defense William Cohen selected him to serve as an advisor on a trip to Cape Town, South Africa. Howard also earned the Joint Service Commendation Medal and NATO medals for service in Bosnia.

Howard has worked for two Fortune 500 companies, including Bristol-Myers-Squibb, where he managed the Secure the Future Initiative, a $100 million effort to combat HIV/AIDS in southern Africa. In 2000, he founded the Impact Young Lives Foundation to provide scholarships and mentorship opportunities to disadvantaged South African youths. In 2003, Howard earned his master of business administration degree with distinction from Harvard Business School.

In 2005, Howard became associate vice president for Strategic and Leadership Initiatives at the University of Oklahoma, and was promoted to vice president a year later. In July 2009, Howard took office as president of Hampden-Sydney College, making him the first African American president in the school's 234-year history.