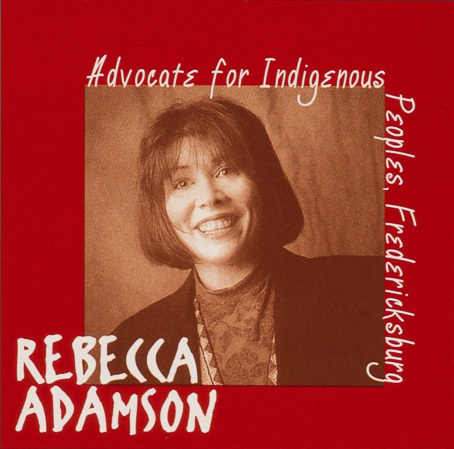 A native of Akron, Ohio, Rebecca L. Adamson spent the summers in North Carolina with her maternal grandmother who fostered in her a love of her Cherokee heritage. She also learned about the difficult conditions Native Americans faced living on reservations, which shaped her life's mission. She left college in 1970 to work on western reservations and directed efforts to end the practice of removing Indian children from their homes and placing them in government or missionary boarding schools where they were severed from their tribal language and cultural knowledge. Her work contributed to the 1975 act for Indian Self-Determination and Education Assistance that allowed Native Americans to administer funds for their own reservation schools.

Adamson founded First Peoples Worldwide to promote indigenous economic determination and strengthen indigenous communities across the globe. Adamson earned an M.S. in economic development at New Hampshire College (later Southern New Hampshire University), and in 2004 Dartmouth College awarded her an honorary doctorate. She has received numerous awards for her transformative work on behalf of indigenous peoples, including the John W. Gardener Leadership Award in 2001.