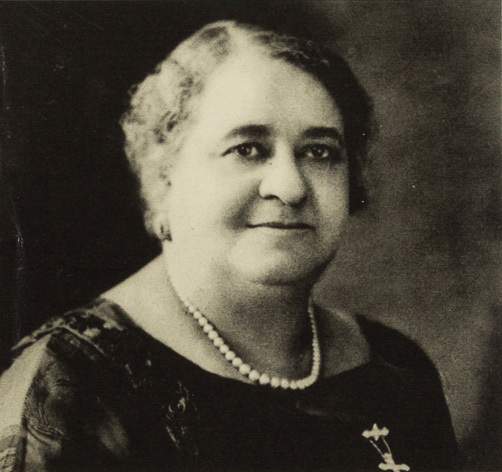 An astute businesswoman, Maggie Lena Mitchell Walker (July 15, 1864–December 15, 1934) was also a tireless advocate for civil rights. Born in Richmond, Maggie Mitchell graduated from the Richmond Colored Normal School and became a teacher. On September 14, 1886, she married Armstead Walker Jr., with whom she had three children. By 1904 they were living in Richmond's Jackson Ward, a vibrant African American neighborhood.

Maggie Walker joined the Independent Order of Saint Luke, an African American fraternal organization, in 1881. She rose through the ranks and became Grand Secretary and steered the Order to fiscal security. In 1901 she declared her intention to expand the Order's services to its members to include a bank, a newspaper, and a department store. The Saint Luke Penny Savings Bank opened in November 1903 with Walker as its president, making her the first African American woman to establish and be president of a bank.

A voice for civil rights, Walker helped to organize a protest in 1904 against the Virginia Passenger and Power Company's policy of segregated seating on Richmond's streetcars. She advocated voting rights for women, arguing that equal pay for their work would not become reality until "women force Capital to hear them at the ballot box." When the Nineteenth Amendment guaranteeing woman suffrage was ratified, she and community activist Ora Brown Stokes organized a successful voter registration drive in Richmond. In 1921 she sought election as superintendent of public instruction on the "Lily Black" Republican ticket that featured Richmond Planet editor John Mitchell Jr., as the gubernatorial candidate. Maggie Lena Walker died in 1934 at her home, which is now a National Historic Site owned and operated by the National Park Service.